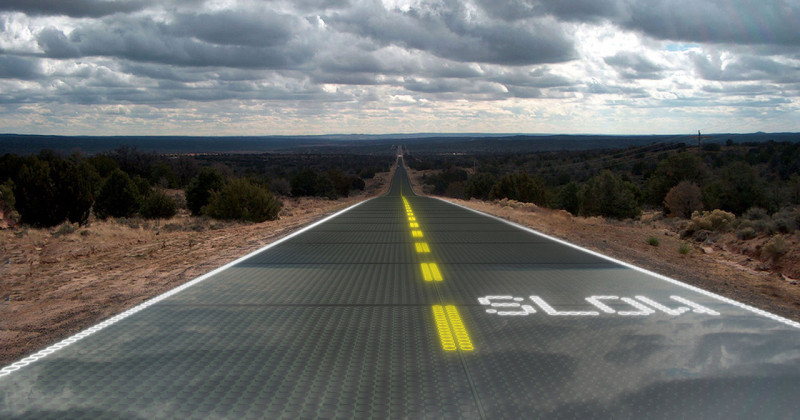 Here’s an interesting idea I just started reading about. Making some of our roadways out of solar panels in essence solar roads. Sounds like a very odd idea or just a waste of money at first glance, but once you look at what they are trying to accomplish you can see there is potential. There are already several places where they have added solar panels to parking lots which not only shade cars, but also provide charging stations for any electric vehicles and extra power to the building who owns the parking lot.

Solar panels in a road would not as efficient as panels on buildings since those can be adjusted. However, there is a lot more road surface and it could help with future transportation systems. The road itself is made of three parts:
1. A hard-wearing translucent top-layer with the solar cells, LED lights (for road markings) and a heating element (to keep off snow and ice)
2. An electronics layer to control lighting and communications
3. A base plate layer that distributes power to nearby homes and businesses (and perhaps electric vehicle charging stations)

Plus, there’s a channel at the edge to collect and filter run-off water (including anti-freeze and other chemicals that normally leeches into the ground).

They are currently doing some small scale tests to work out issues and I look forward to seeing what progress they make and how things will evolve in the future.